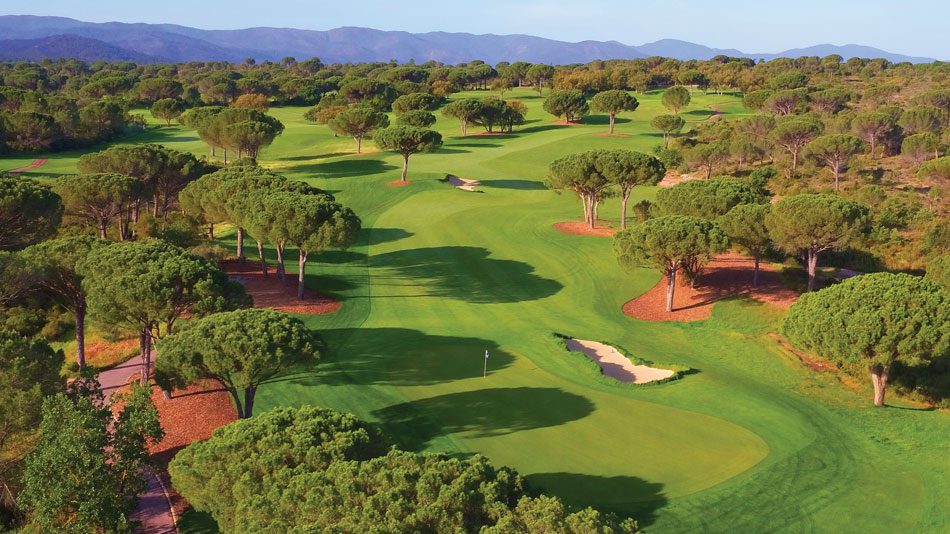 By Sarah Skelton28 July 2022No Comments

With thirty-ish members and their guests each clocking up just a handful of rounds per year, a pair of fourballs constitutes a busy day at Vidauban.

The club is off the beaten track – a long, winding road that connects two small Provence villages – from which the only clue to its existence is the fleeting glimpse through the trees to the tenth hole. By then, you’ve already passed the simple, signless gate that at any glance seems nothing more than the entrance to a rural home.

Robert Trent Jones hadn’t intended for it to be so elusive. In the 1970s, he discovered the site – on the fringes of the Plaine des Maures nature reserve; where rolling hills peppered with umbrella pines are a haven for wildlife, and seams of rock crack through a landscape with endless vistas of astounding beauty – and was compelled to buy it, making a grand plan for three golf courses and a thousand homes.

But his vision never became reality, with two decades yielding a single course and an abbreviated street of homes before local authorities – thankfully, many would agree – called a halt to further development.

Maybe a fitting legacy is that the course Jones did build at Vidauban would become one the finest in continental Europe. And that status is now elevated further, following a major revitalisation project.

Jones worked alongside his son Bobby on the original layout of the course in the early 90s and the club – which, following a period of uncertainty and underinvestment, is now owned by members and led by CEO Richard Sorrell – has maintained its relationship with Bobby and his RTJ II firm.

The last major project, in 2014, focused on drainage and irrigation. Under the direction of RTJ II architect Mike Gorman and John Clarkin of golf consultancy Turfgrass – who himself was so enamoured with the region when he first began working with the club in the 2000s that he decided to move there – the white-hot wheel blades of contractor MJ Abbott’s machinery cut through the rocky ground to establish a freely draining foundation for the course and install sophisticated water-efficient irrigation technology from Toro.

Around the same time, the club hired superintendent Stephen Byrne, whose expertise in major projects while at Fota Island in Ireland and The Wisley in London would complete another piece in the puzzle to bring Vidauban back to glory. Byrne set about specifying a state-of-the-art maintenance facility that would support the club’s ambitions and gave his input into future priorities. “I really felt that new bunkering could transform the course,” he says. “Not just from a maintenance perspective, also in terms of strategy and the connection with the landscape.”

The original bunkers had lost their shape over the 25 years since the course was laid out, and the large ovals were, as Gorman explains, “disappearing into the landscape”.

The pandemic meant travel to and from the site would be challenging. “I thought I could stay for about three weeks and then maybe come back at the end of the front nine to tweak things, which would be the more traditional approach, modified to Covid a little bit,” says Gorman. “It became apparent that just wasn’t going to work. We were finishing bunkers quickly and it was a very field-driven process. For me to leave and try to do this remotely wasn’t going to be efficient or meet our satisfaction.”

Gorman took the decision to stay on site for the entire project. “It worked out perfectly,” he says. “From the club’s perspective they were able to work very efficiently with everybody on site, rather than having to do things remotely, by video, and waiting. Everything was immediate. I was able to see everything in person so we didn’t have to worry about interpreting things through a photograph.”

With the architect on site full time, the design process became much more dynamic. And while this added complexity for MJ Abbott project manager Price, who had to adapt resource planning as decisions were taken in the field, the result is striking. The revitalised course delivers a bold strategy and breathtaking aesthetics.

“We really worked hard to identify strategic bunker positions, based on their original placement but more in line with where shots were being hit with today’s technology,” explains Gorman. “Where we did shift bunkers, we tried to find existing landforms to build into, so they would be highly visible and make sense within the entire golf hole, so you’re thinking about these bunkers when you’re standing on the tee.”

This wasn’t to be a major earthmoving exercise. “We had minimal limits of disturbance and quite a bit of rock underneath some areas of the site, so we couldn’t move much,” says Gorman. “It’s a beautiful piece of land and you really don’t want to move dirt. We’ve got this spectacular one-of-a-kind landscape that we wanted to respect and make the bunkers a part of.”

The overall sand area has been reduced and there are now fewer bunkers, but they are more impactful, with every hazard playing a clear role in the strategy. The sand-flashed faces, often very steep, are accentuated by fescue eyebrows, which at hole peripheries blend into the surrounding landscape, while on more central hazards emphasise visibility.

You could pick out almost any hole on the updated course to illustrate the success of this strategy. From the tee of the par-five eighth, for example, a pair of bunkers asks to be hugged for the best line. As you approach the landing area, the artistry of their design, each trap cut into a semi-circular ground contour, reveals itself. The eye is then quickly drawn to the challenge that remains, as the hole sweeps left and golfers are dared to broach another imposing trap for a chance of reaching the bunkerless green.

“Some of the best par fives in the world are where you really need to think about your second shot,” says Gorman. “So many times you play a par five and it’s a throwaway, mindless second shot. What we tried to do on number eight is make sure that that you’re really thinking about your second shot, whether different lay-up choices or, if you hit a good drive and you’re a higher calibre player, going for the green in two and what it means if you miss your shot, what your recovery options are going to be.”

On the par-four fifteenth, three bunkers, all relatively central to the line of play, force you to plot a route to the skyline green. “We found this one subtle valley in the fairway on the left side and felt it was just a perfect bunker landform,” says Gorman. “And not only did it fit in well, but it also fit perfectly for the strategy of the golf hole. There was an original ‘lighthouse’ bunker that was probably about 350 yards off the tee. It looked good but from a strategic standpoint didn’t come into play except maybe for a second shot. So we really wanted to take the same sort of aesthetic approach, but turn it into a more strategic bunker that you’ve really got to think about off the tee.”

The project’s second prong, restoring the greens to their original sizes, has had a marked impact on the perceived scale of the course. “Over time the green perimeters got really narrow and that’s something that, with Steve, Rich and John, we’ve all worked to get back,” says Gorman.

Sorrell highlights the ninth, a long, rolling uphill par four with a green that he says appears to pitch in the opposite direction now the original edges have been restored, even though there has been no work at all on the internal contour of the putting surface.

Such changes in character are down to green expansion combined with the attention paid to green surrounds.

“There are all these great contours around the greens that were hidden in rough,” says Gorman. “For instance, number two is a short, powerful hole. If you play a forward tee it’s a great drivable par four and has one of the more spectacular rock formations with a natural waterfall during the winter. That was a great existing complex that we probed out to get back to the original perimeter. But then we also found, looking at early drawings, that there was a wide fairway entrance. With Steve and John, we worked here and in quite a few other places to sandcap those entrances and widen the surrounds.

“Seventeen is another great example, where the green sits in a punchbowl and we were able to expand the fairway surrounds and really open up more dimensions in playability, where you can play a flop, a putt, all sorts of different shots, as opposed to it just being a one-dimensional shot out of the rough.

“It was like an archaeological effort around some of the greens as those were exactly the type of contours we wanted to identify and transform into short grass. There are some great helping contours that if you have a keen eye you can find and hit, and it’s going to help the shot.

Final tweaks are still in progress. “As the bunkers have now had a chance to grow in, we’re making sure that the fescue doesn’t adversely affect playability,” says Gorman. “One of the things we’re working with Steve on right now is some mowing pattern refinements, especially around greens, where a well-played shot around a green surface isn’t going to get stuck in some of the fine fescue. We’re just detailing some of those areas so if you hit a shot around a green off by a little bit, you can find it and play it and it’s not too severe a penalty.”

Gorman reflects on the experience as a one-off opportunity. “It was really the first time I had ever been on a renovation 100 per cent of the time, so for me personally it was one of the best experiences I’ve ever had on a project, to see and be a part of that process all the way from shovel to seed in the ground,” he says. “If you look at the team that was involved, from Rich and Cyprien, who deserve all the credit in the world for developing this team, to Steve, John and MJ Abbott and the crew that was out there, they poured their heart and soul into this project.”

There is word that the club might be considering an increase in the size of its membership. Let’s hope it does – the more that get to experience this place, the better.